Thank you everyone for saying such nice things yesterday and wishing me luck for the announcement (or otherwise) to my sister, who’s going through a lot of the same stuff as I am.

I think maybe I was overly worried and thinking she was going to be like me (the sort of person who feels bad/miserable when other people announce their pregnancies) when really she is a lot nicer than I am! I did sort of prepare to talk about it and think how would I introduce it, and thought that she’d probably want to talk about going to see Dr S at some point, probably when we were having dinner.

We planned to meet up in the east and then head towards the Emirates Airline (the cable car sponsored by Emirates that goes across the Thames) and then go to have dinner in a dog friendly pub in Greenwich. Unfortunately for everyone, they left it to me to organise, and I have the worst sense of direction ever, which meant we ended up having to walk a lot further than we wanted to, and ended up having to get a taxi to the pub after going on the cable car because the pub I’d booked dinner in was not close to the end of the cable car at all! T found this hilarious and said I must already have baby brain.

Anyway, it came up organically in conversation so I needn’t have worried. My sister noticed some plasters on my hand (from where I had the intralipids infusion and the two attempts to get the IV in!) and asked what they were, and I told her I’d been to have the IV with Dr S, who she was seeing on Monday, because… I’m pregnant.

She was super happy for me and we ended up having a load of discussions around what to expect, and T and my sis’ partner joined in (they added some funny anecdotes about the “production room” experience) and so we all had a good time.

It was really nice to catch up, Dog was super well behaved (probably tired after the unexpectedly long walk), I’m currently pregnant, and it just felt nice. Like they were genuinely happy for us.

Also I did a little care package for them which was a bag full of IVF anticipation little gifts and a card from the three of us (me, T and Dog) to say good luck with this cycle.

She (and her partner) really liked it and I think it sort of felt like we were saying to them, we are wishing you all the luck for your cycle. Hopefully it made her feel a bit less of a “blow” that I’m [currently] pregnant, although I don’t think I needed to worry as they both seemed genuinely happy for us. I guess also if they’re going to see Dr S then it is hopefully a bit encouraging. (Her partner and T had a joke about quackery, as they are the sceptical ones, but we all agreed that if it works then it’s worth it!) It is nice to talk about all the IVF stuff with people who understand.

I wanted to do a test this morning just because it was a Clearblue one yesterday and I wanted to double check the First Response progression. It looks pretty good! Now I understand that the test line “steals” some dye from the test line as the HCG increases, that’s a bit reassuring. 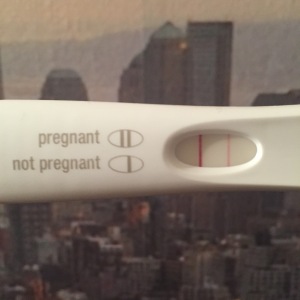 I also laid them all out so you can see the full progression over a week. The Clearblue one is the official test day one but you can see the left test line getting stronger each day.

I think I can stop testing for a while now. We are now onto what Dani from The Great Pudding Club Hunt called “the enhanced two week wait” – the wait before getting the first scan. Nail biting stuff…

Tell us your thoughts... Cancel reply