Today is the day I decided to spit in a bottle and hope one day it might lead me to my biological family.

If you’ve been following my blog, you’ll know that 1) I was adopted as a baby, from overseas, in a closed (no further contact) adoption, and 2) I was given an anonymous donation via a forum for transracial adoptees so that I could buy a DNA test.

The DNA test from 23andMe has been sitting on our coffee table for days. Probably weeks. It’s a weird thing, if you’re adopted, the promise of maybe being able to tell you a bit more about your genetics… the other stuff that people take for granted… to maybe know what your ethnic makeup is… to maybe know what your medical history might be… and the biggy – to maybe get in touch with some of your biological relatives.

For me, I have had a complex, layered, interesting life that I’m pretty happy with right now. But I wasn’t always. I had a tough time growing up, feeling and looking different in a mainly white world. But – I’ve come through it okay. I love my (adoptive) family. I love all those people who are part of a family with whom I share no genetics and don’t look anything like. To many people I’m one of those “Happy Adoptees”. (A label that people use as if adoptees can only be happy or angry, not recognising that most of us are neither, or both, all of the time.)

The other thing I want to say is that wanting to know more about your biology / genetics / first family is not a reflection of having a bad life, hating your adoptive family, or whatever. It just isn’t. Take my word for it. I don’t want to keep having to apologise for this but think of it this way: Imagine not knowing anyone in the world you look like. Imagine always having to say, “I don’t know” when the doctor asks you about your medical history. Imagine never knowing anything about your parents and being expected just to forget about them and not wonder. That’s what it’s like being an adoptee.

For me what has brought all this to the fore is this baby, B, I’m carrying and am due to give birth to in January. I can’t escape the feeling that he will get half (or more!) of my looks and genetic makeup and I’m completely inequipped to give him any notion of what it is to be [our race]. That makes me feel really sad. And I guess it’s doubly a big thing for B, because he has two parents who were adopted, so he’s the first of our line. That is a really weird thought. He will be biracial with no idea about one half of his racial makeup, because I can’t give him that.

I grew up feeling a pull between being completely assimilated into my parents’ predominantly white world (I grew up in the “colourblind” era) and feeling kind of ashamed of my race. There are a lot of negative stereotypes with being non-white. And for me, it has taken me a really long time to even identify with being my race. And I feel like I look that way but I have no information, no frame of reference, no language or culture or love of the food or anything else that non-adopted people grow up with.

Anyway, for some reason I decided today was the day.

The DNA testing kit comes in a small box. Inside is a little tube you have to spit in up to a certain line. It looks like a lot, but actually it didn’t take me too long. (I guess I have a lot of spit?) I kept worrying I probably wasn’t spitting right, but then how does one spit right?

Once you’ve filled it to the line with your spit, you click the temporary lid on and a liquid comes out which mixes with the saliva and presumably preserves it long enough to post it. Then you screw the cap on and bag it up, ready to post back in the box it came in. Clever, eh? 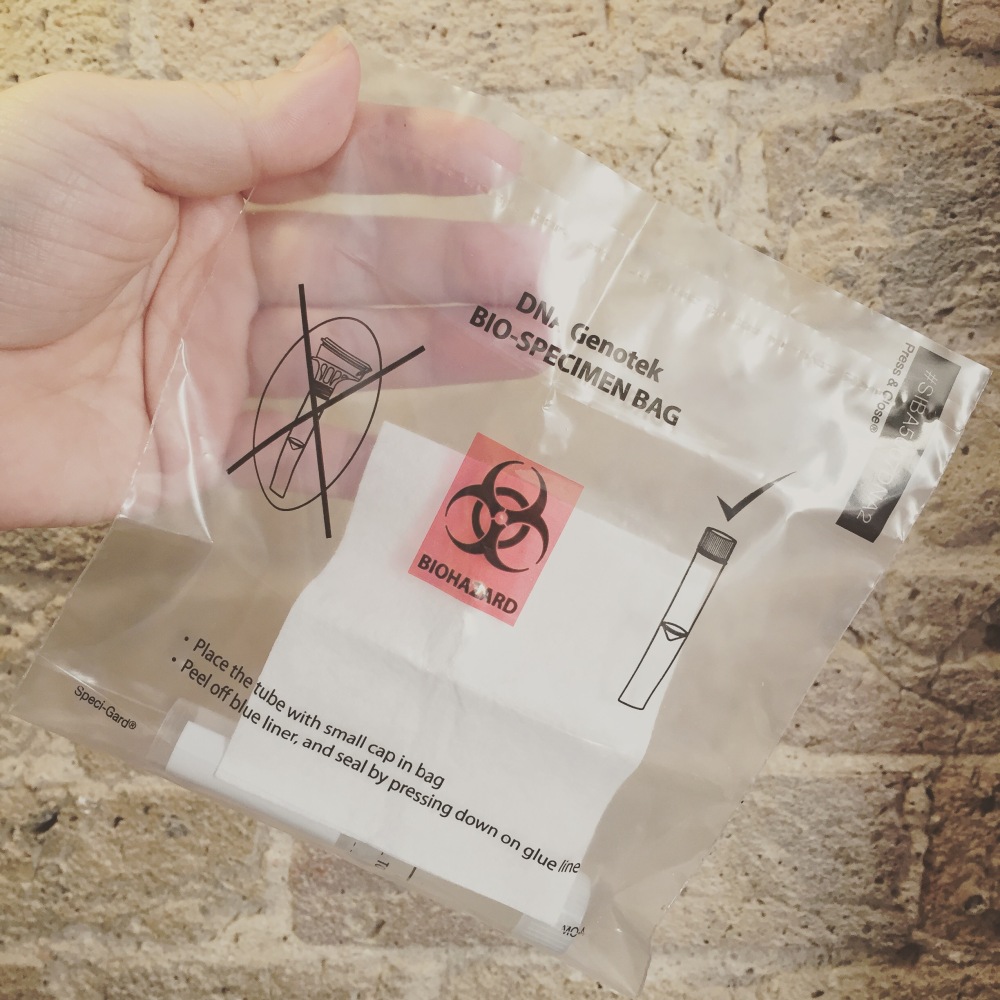 I liked the way it says Biohazard on! My saliva, the chemical weapon!

So now I have it boxed up and ready to go by the front door. The box handily comes with pre-paid postage but I figure I’ll take it to the post office to post it, just in case.

And then it’s a waiting game. (Where have I heard that before?) There is a website where I can track whether it has been received by the lab, and then they analyse it and I’ll find out if they can get anything useful out of it.

I don’t know what I’m more interested in really – the idea that I might find out more about my genetics, my medical history, or some distant relatives.

Or maybe it’s just a typical adoptee dream that I’ll log on and it’ll tell me that my biological brother / sister / parents have already registered, and they’ve been waiting for me to test.

I know that it’s completely unlikely that they would have done this, but for now I can dream…

Tell us your thoughts... Cancel reply